The Glass Castle has its own version of all that, all rolled together. It’s based on the best-selling memoir by Jeannette Walls, the former newspaper reporter, magazine writer New York City gossip columnist whose tale captivated readers with the wrenching details of her nomadic, poverty-stricken childhood.

Walls and her two young siblings were taken by their deeply dysfunctional parents across the country, from one dilapidated, often abandoned house to another, often just one step ahead of the law, creditors and child protective services. Their mother, Mary Rose, who fancied herself an artist, would rather paint than provide meals for her kids; father Rex was an alcohol-fueled, cigarette-puffing schemer and scammer who railed against the “system” and dreamed of one day building a solar-powered castle made of glass.

There was love, but there was also screaming, fighting and drinking and an apparent inability to hold down—or even seek—any kind of job.

Woody Harrelson and Naomi Watts play the parents, and three different groups of actors portray Jeannette and her brother and sisters at different ages and stages, told in overlapping flashbacks. Brie Larson anchors the tale as grown-up Jeannette prepares in the late 1980s to marry a successful young Wall Street broker (Max Greenfield, who played Schmidt on TV’s New Girl) in a final defiant act to break free from her past.

But she can’t shake off the literal and psychological scars of her childhood.

You might recognize several of the younger performers. Shree Crooks, who plays Jeannette’s younger sister Maureen, was Scarlett Lowe in American Horror Story, and also one of the kids in the Oscar-nominated Captain Fantastic. Sister Lori is played by Sadie Sink, who you’ll recall as Max if you watch Stranger Things. Iain Armitage, who has a couple of scenes as little brother Brian, will star this fall in The Big Bang Theory spinoff series Young Sheldon.

But it’s young Ella Anderson, as young Jeannette, who steals the show—and your heart. Anderson starred on the Nickelodeon series Henry Danger and had roles in the movie comedies The Boss and Mother’s Day, and her expressive face shows just how Rex’s weakness and failures eventually crushed and scattered all his children.

But the relationship between a parent and a child can be a paradoxical and complicated thing, and Jeannette later confesses that her father is the smartest man she’s ever known. 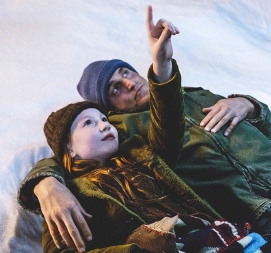 It’s one thing to watch Swiss Family Robinson and be entertained by Walt Disney’s fanciful account of how a shipwrecked father, his wife and their kids built a life on an island with bamboo, coconuts and palm fronds. It’s another to know The Glass Castle is based on a true account grounded in issues of mental illness and addiction, of irresponsible parents who willfully let their kids live in rundown shacks with no electricity, go without food or medical attention, and do nothing when they were physically abused—and how, at least in the movie, everything comes out in the feel-good, all-is-forgiven wash.

Instead of the gritty, spunky survivor’s tale of triumph in the book, the movie is essentially a Hollywood melodrama about quirky, wayward, happy-go-lucky bohemian parenting. Harrelson and Watts give it their best, and so does Larson, who won an Oscar for Room, particularly since she’s basically little more than a recurring supporting player. But the documentary footage over the credits suggests that the real story of the real people they’re playing would likely be far more interesting than this glossed-over dramatization, which seems to buff out some rougher, tougher edges, including an attempted rape and childhood sexual assault.

At one point, the children have gone for days eating only butter because there’s no other food in the house. Then they apparently go for several days more after Rex spends all the household money on an all-night booze bender. The movie never picks up the no-food, we’re-starving idea again—and neither do the children. Did the kids get anything else to eat? What? How? When? 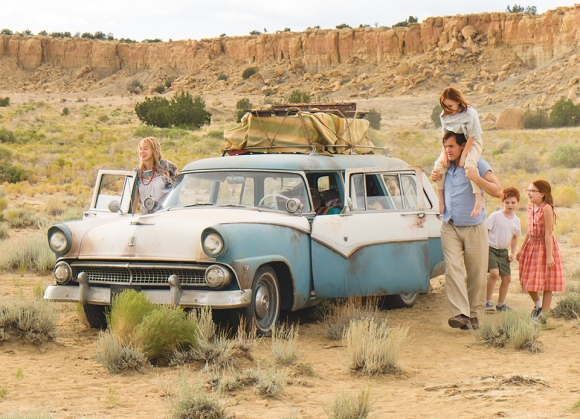 There are laughs, there are tears—in one scene, they actually drip off Brie Larson’s quivering chin. But mostly, there’s a sense that everything that happens brings Jeannette closer to her family—to her siblings, her mom and even to her dad.

At a dinner—with more tears—at the end of the movie, Jeannette says simply, “I feel lucky.” And everyone gives a glowing toast to Rex, the dreamer, schemer and drunkard, ne’er-do-well father who kept them together until he finally drove everyone apart.

Wow. Score one for extremely well-adjusted kids. At least in the movies.