The terrifying devil doll that launched ‘The Conjuring’ is baaaaack!

The demonic backstory to the evil plaything that inspired The Conjuring and later got its own spin-off, Annabelle: Creation effectively fulfills horror fans’ need to be scared—and reminds us of just how creepy dolls can be.

In the opening credits, we watch in the 1950s as a toymaker (Anthony LaPaglia, best known for playing Jack Malone on TV’s Without a Trace) carefully puts the finishing touches on the doll that will become Annabelle, a gift for his young daughter, Bee.

Bee is struck by a car in the very next scene and killed.

Then, 12 years later, the heartbroken toymaker and his mysteriously bedridden wife (Mirando Otto, Rebecca Ingram from 24: Legacy) open their home to a group of orphan girls and a young Catholic nun, Sister Catherine (Stephanie Sigman).

The girls are told they can freely go anywhere in the house, except for one place—Bee’s old bedroom, which is always locked.

Swedish director David F. Sandberg, whose resume includes last year’s horror flick Lights Out, doesn’t really do anything flashy or new. But he certainly knows how to solidly ramp up the suspense, and once he turns on the jolt juice, it really starts to flow.

The setting of a big, rambling, Victorian-style farmhouse, on a desolate hilltop in the middle of nowhere (actually, Southern California) makes a great place for the spooky shenanigans. Sandberg keeps gore—and slaughter—to a minimum, especially for an R-rated flick, and gets maximum value out of things that are only glimpsed briefly, seen in the shadows or stirred in the darkness of the imagination.

That’s not to say you won’t see some things that will make you gasp, and if you come to see bodies torn apart, walls smeared with blood and eye sockets missing eyeballs, well, you won’t be disappointed.

The device of a houseful of young women, or girls, is a well-worn horror cliché. Here, the orphans, who range in age from kids to older teens, provide several creative opportunities for interaction with Annabelle and the house, from telling spooky stories underneath a bedsheet to exploring the grounds and outbuildings. A game of hide-and-seek holds quite a surprise, and that sinister-looking scarecrow in the barn—well, there’s a reason he looks so sinister.

This is definitely the kind of movie you need to see in a theater with other people. It certainly adds to the enjoyment to hear a whipped-up audience chiming in, shouting at the screen, offering characters advice: “Don’t open that door!” “Close that door!” “Get away from that!” “Don’t go in there!”

A woman in front of me could barely stay in her seat; several times, she literally leaned forward, arms extended, as if reaching into the screen to extend a helping hand.

One of those times was the dumbwaiter scene, when one of the smallest girls was trying to get away from one of the other little girls—who had turned into a demon—in the shaft of the house’s dumbwaiter, and the ropes were stuck. Yikes!!! 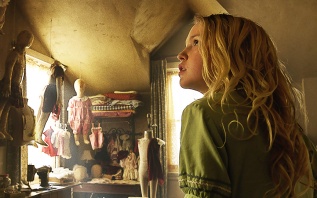 Much of the focus is on little Janice, played by Talitha Bateman (her brother, Gabriel, starred in Lights Out). Janice is recovering from polio, hobbling around in leg braces, and Annabelle singles her out for particular attention.

The Annabelle and Conjuring movies walk a profane line between good and evil—and evil always seems to have the upper hand. No amount of prayers, holy water, priests, nuns, rosary beads or pages from the Bible plastered over a door can keep the malevolent spirt of Annabelle from raging across the decades. The doll, a priest says, is a conduit for evil. Mullins’ wife says it’s “the devil itself.”

Whatever it is, it’s on the way to being a lynchpin of one of the most successful horror franchises ever, a nearly $900 million part of director-producer James Wan’s creepshow empire, which includes Saw (six movies and counting), Insidious and now the ever-widening world of Annabelle. Next year we’ll see The Nun, of which Annabelle: Creation provides a peek—a dark, spectral presence in the corner of a picture frame.

Even if you don’t buy into believing that Annabelle is a conduit for evil, you have to agree: This devil doll has certainly tapped into the box office. And as long as people enjoy being spooked by creepy dolls, she’ll be around—somewhere, in the shadows, behind a door, inside that locked room.