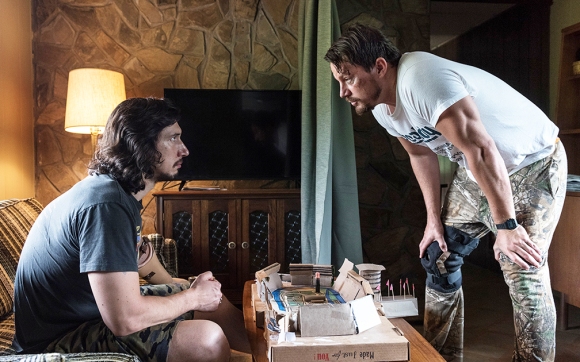 Director Steven Soderbergh’s high-spirited hillbilly-heist caper, about a couple of born-loser West Virginia brothers who scheme to tap into a multi-million-dollar NASCAR jackpot, sometimes feels like a rollicking, redneck riff on his Ocean’s Eleven franchise.

But Logan Lucky has its own pace and personality, a crackpot comedy yarn with a dynamite, all-star ensemble cast.

Channing Tatum stars as Jimmy Logan, a former high school football jock and divorced dad who’s just been let go from his hard-hat bulldozer job. Adam Driver is his gloomy younger brother, Clyde, who wears a prosthetic left hand as a reminder of his two tours of duty in Iraqi and now tends bar at the local watering hole.

In addition to losing his job, Jimmy has forfeited custody of his young daughter (Farrah Mackenzie, who played Dolly Parton’s sister, Stella, on the TV movie Coat of Many Colors) to his flinty ex-wife (Katie Holmes). Clyde has already served time in jail for a minor offense.

Both wonder if the Logan family “curse” they’ve heard about all their lives is true.

Jimmy’s former employment had him filling in dangerous sinkholes underneath the Charlotte Motor Speedway over the state line in North Carolina, and it gives him an idea. He knows the money—a torrent of bills—from the massive complex is routed underground directly to the bank during racing events. And he knows just how to get to it…

The sets in motion a crazy-quilt, cracker-barrel scheme that involves a prison break (out as well as back in), color-coded cockroaches and a bomb made out of bleach sticks, salt substitute and Gummi Bears.

You’ll get a hoot out of seeing “James Bond” in pinstripes: Daniel Craig is a beefed-up, backwoods, buzz-cut rascal as Joe Bang, the jailbird whose expertise with explosives is key to the job. Riley Keough plays Mellie, the Logans’ firecracker little sister who works as a hairstylist. Country singer Dwight Yoakam gets a nifty role as the bully prison warden, who can’t admit his facility ever has any problems, big or small.

Seth (Family Guy) Macfarlane is almost unrecognizable as a detestably flamboyant British racing sponsor. Hillary Swank plays a dogged FBI agent determined to make her case. Sebastian Stan is a rock-star racer who treats his body as a clean machine. Katherine Waterson’s mobile health-care provider carries a long-burning torch for Jimmy. Joe Bang’s dim-bulb little brothers Sam (Brian Gleeson) and Fish (Jack Quaid) also sign on for the action, boasting of their savvy and their value to the team.

“I know all the twitters,” says Fish.

This collection of oddballs, misfits, lowlifes and small-town joes and janes clicks together into one hilarious groove, overflowing with twists, turns, screwball gimmicks and inevitable mishaps. Soderbergh certainly knows how to steer a sizeable cast through the in-and-out mechanics of a crazy caper, and he even weaves in a surprisingly sentimental subplot around a tiny-tot Little Miss West Virginia contest and John Denver’s song “Take Me Home, Country Roads.”

Though it’s set in the South and it’s a comedy about Southerners and Southern culture, Logan Lucky never feels like it’s making sport of its characters, their way of living or their institutions. You laugh at them—but you also root for them.

When the heist is referred to in the movie as the “Ocean’s 7-11,” it’s a reference to the local convenience store central to some of the action as well as a meta nod by the screenplay to the movie’s pedigree in director Soderburgh’s hit trilogy of Oceans con-comedy movies.

But unlike the Oceans flicks, this Dixie-fried delight of a heist is dressed down, not spiffed up. And it’s happy to play in its own backyard instead of glitzy Las Vegas casinos or ritzy European hotels. A rowdy, fun-filled romp with an A-list cast having a summer blast, Logan Lucky will leave you feeling lucky you came along—and remind you that good fortune sometimes snaps open with a Southern drawl.