The chemistry of Hart & Cranston can’t warm up the sentimental sap of this predictable, recycled comedy 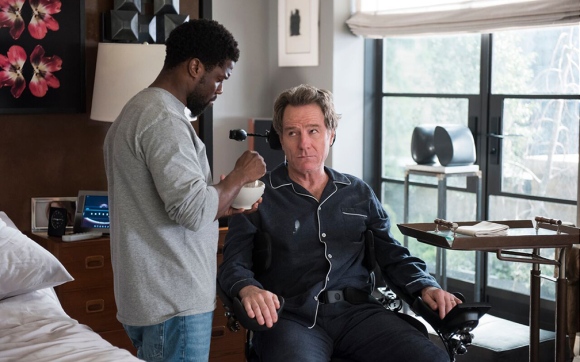 What do the Statue of Liberty, croissants and Kevin Hart’s new movie have in common? They all came from France.

The Upside, a remake of a hit 2011 French film, stars Bryan Cranston as Phillip, a rich white paraplegic, immobilized from the neck down, who hires black ex-con Dell (Hart) as his personal caretaker, or “life auxiliary.”

“White people got a name for anything,” says Dell, who thinks he’s being interviewed for a janitorial position when he shows up at Phillip’s luxury Manhattan penthouse apartment. Much to his surprise, as completely unqualified as he is, Dell lucks into the job. 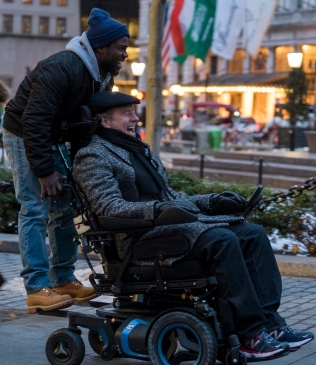 There’s not a lot of other surprises in The Upside, however, which follows a pretty standard Hollywood buddy-movie template and clicks off many character stereotypes with which audiences are very familiar. Phil is white, successful, super-rich, buttoned-up and bitter. Street-smart Dell is a quippy, zippy, quick-witted sprite from the opposite end of the socio-economic spectrum.

They’ve both got problems and issues and holes in their souls. But guess what? They help each other fill them, at least superficially. Phil introduces Dell to kumquats and opera, gives him some hefty paychecks and lets him drive his garage full of sweet sports cars; Dell turns Phil on to weed, buys him a hooker (!) and introduces him to the soul-sister grooves of the Queen of Soul, Aretha Franklin.

Nicole Kidman plays Phil’s Harvard-educated business manager, Yvonne, whose long-sublimated affection for her boss remains at a low simmer for most of the film. Dell’s ex (Aja Naomi King, who plays Michaela Pratt on How to Get Away With Murder) has given up on him and his missing child-support payments. Julianna Margulies (star of TV’s Dietland and The Good Wife) has one scene as the mystery woman Phil decides to meet in person after a long courtship by mail.

It’s no coincidence that a subplot revolves around a rare copy of the book Huckleberry Finn. Mark Twain’s classic 1885 tale, about a runaway slave and his young traveling companion floating away to freedom down the Mississippi River, is today heralded as a scathing confrontation of American racism and slavery.

The Upside doesn’t come near any issues like that, but it certainly suggests that it’s built on same foundation—one in which a white businessman, such as Phil, can build a towering financial empire, but a black man, like Dell, can’t get out of the projects (or break the cycle of crime and prison) unless he’s rescued…by someone like Phil.

The movie is much more interested in the low-hanging fruit of easy jokes and the quick splash of sappy sentiment. Dell thrashes and squawks as a high-tech, computerized shower in Phil’s apartment blasts him with gushing jets of water and talks to him in German. Phil drools to fake an epileptic fit to get Dell out of speeding ticket. A scene in which Dell tries to get the all-business Yvonne to laugh seems tailor-made for Hart to cut loose on his comedy skills.

Another scene, in which Dell has to change Phil’s catheter, is played strictly for laughs at Dell’s unease. It’s all routine for Phil, but for Dell, it’s extremely uncomfortable—to not only pull down another man’s pants and touch his private parts, but to even say the word “penis.” The scene is uncomfortable for other reasons—because of Hart being back in the news recently about his homophobic tweets and comments and how he wasn’t going to host the Academy Awards, after all.

Hart, of course, is best known for his laugh-out-loud roles in ribald comedies including Ride Along, Night School, Get Hard and The Wedding Ringer. He provides plenty of laughs in The Upside, but the movie also shows he can hold his own in something other than a wall-to-wall yuk-fest. It would be interesting to see him in a straight-out drama.

Cranston, the former TV star of Breaking Bad, has done a variety of later movie work, but this had to be one of his most challenging parts. For a character who can only work the screen with his face, and his voice, he holds his own with Hart, who splays all over the place. They make a good yin and yang.

Good, but not quite great. The Upside offers a pleasant, warm thaw from the January cold. But it can’t quite overcome the downside of stereotyping, clichés and an overlay of hokey, jokey sap that coats it in a veneer of gloppy, predictable Hollywood goo.

At least it ends on an up note—a soaring tune by Aretha Franklin. “The Queen,” notes Dell, “makes everything better.”

As they say in France, Oui, indeed.