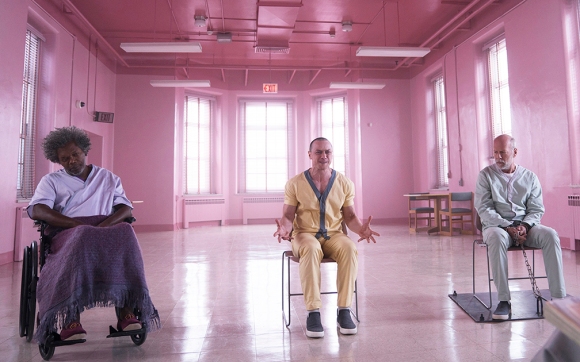 What if comic book superheroes are real?

That’s the question director M. Night Shyamalan poses in Glass, which brings together characters from two of his previous movies.

Bruce Willis is David Dunn from Unbreakable (2000), the lone survivor of a train crash who emerged virtually indestructible and with the ability to see bad guys’ hidden evil deeds. James McAvoy starred in the horror-thriller Split (2016) as the psycho Kevin Crumb, whose “horde” of multiple personalities included the murderous, feral-like Beast.

And the movie takes its title from the character of wheelchair-bound Elijah Price (Samuel L. Jackson), whose brittle bones break, like glass, with the slightest pressure.

If you’re a fan of Shyamalan movies, you’ll likely know how all these characters connect. You’ll know that, and know why, Price caused the wreck of the train on which Dunn was traveling. You’ll remember that McAvoy’s character(s) in Split kidnapped three girls, killing and partially devouring two of them. And you’ll understand why Dunn—now a hooded vigilante dishing out justice to street thugs—wants to find Crumb before he can harm any more young women.

Glass gets off to a rousing start but stalls when the drama settles in at the psych ward of a Philadelphia mental hospital, where Dunn and Crumb are brought when they’re apprehended. Guess who’s already there? That’s right, Mr. Brittle Bones himself.

At the hospital, Dr. Ellie Staple (Sarah Paulson) tries to convince all three men that they are suffering from a very specific mental disorder. “I specialize in a particular kind of delusion of grandeur,” she says. “Individuals who believe they are superheroes.”

The core of the film is a long, windy counter-argument for superheroes, comic books and how gods have always walked among us. Of course, Dr. Staple tries to shatter and smother this idea, particularly in the movie’s centerpiece, a gaudy “group therapy” session with all three characters lined up in a pink room. She dismisses Price as crazy but brilliant, Crumb as an anarchist with dissociative identity disorder, and Dunn as “the reluctant hero.”

“She even has explanations for Dunn’s super-strength and his second-sight mental abilities, and how Crumb’s “Beast” can climb vertical walls and not be harmed by shotgun blasts. She hasn’t got Price quite figured out yet; he’s kept so heavily sedated and confined to his wheelchair, no one knows what’s going on inside his head, behind his blank stare. Is he totally out of it, or just biding his time, waiting until he can hatch a mastermind plan?

What do you think?

Anya Taylor-Joy, whose character was the only one of the girls who didn’t get killed and cannibalized in Split, returns to help Dr. Staple. As a sexually abused child, she can connect with the adolescent trauma—the “brokenness”—that caused Kevin Crumb to split into a multitude of some two dozen distinct personalities, many of which come out to “play” in the course of the movie.

Glass is Shyamalan’s Avengers, his Frankenstein Meets the Wolfman, his ultimate, geeky intersection of comic book culture, superhero backstories and pop mythology. It all builds to a showdown, but it’s more of a letdown—a shoving, heaving smashing-bashing match on a lawn that, well, dents a cargo van, pins a SWAT cop underneath his shield and busts a portable water tank. Yawn.

Shyamalan, whose other films include The Sixth Sense, The Village, Signs and The Visit, obviously knows how to make a solid movie, and this one certainly has some nice touches. He’s still a master of ratcheting up the tension and scaring you more by showing you less. The atmospheric soundtrack, which sometimes sounds like an animal screeching or growling, adds to a building sense of dread.

And I loved a quick shot of a magazine cover about the world’s tallest new building, which becomes a plot point. The headline reads, “A True Marvel,” a nod to the name of the iconic comic-book company that gave the world Spider-Man, Daredevil, Iron Man, Thor and dozens of other famous superheroes and villains.

But this Glass is only half full, a tumbler stocked with misfit characters, capable actors and innovative ideas, but lacking the juice and seasoning to make a blockbuster cocktail. The pacing is often dull, the dialog is hopelessly clunky, and fans waiting for Shyamalan’s “gotcha” twist ending—his trademark—will likely come away feeling a bit underserved, if not cheated.

“If superheroes exist, why are there only three of you?” Dr. Staple asks her three patients. Glass asks us to consider if there are more. Hollywood certainly has an answer—Captain Marvel opens March 8, Shazam! and the next Avengers arrive in April, and there’ll be a new X-Men adventure in June.

Looks like Dr. Staple could have her hands full.