He’s been many things—a U.S. president, an astronaut, a baseball prodigy, an Alamo fighter, even piano pounder Jerry Lee Lewis—but Dennis Quaid’s career has sure gone to the dogs.

The versatile actor, whose movie and TV resume spans almost 100 roles and weaves through almost every genre, here returns to the canine comedy-drama franchise that became a modest hit in 2017 with A Dog’s Purpose.

A Dog’s Purpose was about the “soul” of a loyal pooch, recycled and reincarnated several times in various dog bodies over the decades as it bonds—and continually reconnects—with a boy, Ethan, who eventually grows into adulthood (and is played by Quaid).

Dogs, of course, don’t live as long as humans, and the heartrending “hook” of A Dog’s Purpose was how each adorable mutt had to die, one way or another, in order to move the story along. That signature plot device is very much intact in A Dog’s Journey, which picks up where the first movie left off.

And again, it’s based on the source novel by W. Bruce Cameron, who had a hand (with three other writers) in the screenplay. And although the doggie Grim Reaper has to do his thing, the powerfully sentimental tone is (oddly) kid-friendly throughout, thanks mainly to a generous dollop of poo, pee and butt-sniffing gags.

We reconnect with Ethan (Quaid), who’s now a farmer in Michigan with his wife (Marg Helgenberger, who played Siobhan Ryan on the soap Ryan’s Hope in the 1980s), and his faithful sidekick, an aging Great Pyrenees named Buddy. (As in the previous movie, all the dogs are voiced by Josh Gad.) Soon enough, and sure enough—about 20 minutes into the film—we have to say goodbye to Buddy, and we’re off to the next dog, and the next phase.

But before Buddy dies, blissfully journeying into canine afterlife, Ethan asks him to always look after his precious granddaughter, C.J.—played as a toddler by Emma Volk, then by Abby Ryder Fortson (young Cassie Lang in Ant-Man and its sequel), and finally by Kathryn Prescott from TV’s The Son. That means Buddy’s spirit will be funneled, over the years, into curs of various shapes and sizes, all on a mission—and all sounding like Olaf the Snowman from Frozen—to find and protect C.J., wherever she is.

C.J.’s gonna need some shepherding, for sure. Her mom (GLOW’s Betty Gilpin) is a major screwup, neglecting her daughter, hating dogs and soaking her frustrations in alcohol. Leaving home and striking out on her own as a teenager, C.J. has a scary brush with a scruffy, abusive bad boy (Jake Manley, from TV’s The Order) before finally reconnecting in New York City with her childhood best friend, Trent (Henry Lau, a singing/rapping pop star in China and South Korea).

There’s a lot of melodrama—and a lot of dogs. Buddy’s reincarnations include a Yorkshire terrier named Max and a female beagle, Molly, and he/she meets others along the way. “What happened to you?!” a bewildered Max asks an ultra-pampered poodle in New York.

The first movie was a bit of a dog, so to speak, with critics, and put Swedish director Lasse Hallström, a three-time Oscar nominee, in swirl of controversy about animal abuse. This time around, the leash is in the hands of director Gail Mancuso, whose previous experience is mostly in TV sitcoms. A Dog’s Journey won’t get any Best in Show awards, but it also likely won’t raise any hackles with PETA. 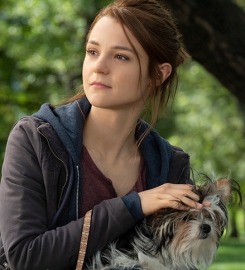 Prescott (another British actress who can play American characters flawlessly) carries much of the movie and makes the story strongly fem-centric as C.J. struggles with finding her voice as a fledgling singer-songwriter. And the talented Gilpin (Emmy-nominated for her work in Netflix’s female-wrestling drama GLOW) turns her role as C.J.’s mom into something more, and more dimensional, than you may first expect.

Dog lovers will likely love A Dog’s Journey, a fanciful, wholesome, feel-good furry-tale that offers an easy, pat answer to an age-old, existential question: What happens when life’s journey is at its end? In the case of dogs like Buddy, Max or Molly, they run through an Elysian-like wheat field in slow motion and get a doggie do-over. It’s a curious kind of Fido-tailored Buddhism that leaves a thousand questions unanswered. Where are all the other dogs? What about cats? When my dog is barking at nothing, is he really barking at Dennis Quaid?

Warm and fuzzy but a bit lacking in substantial bow-wow-wow, this franchise nonetheless feels like it’s turning into a faithful movie companion that’s figured out its own secret to coming back again and again. What’s next? A Dog’s Mission? A Dog’s Tale? Gad-zooks: All Dogs Go to Heaven (But Only For a While)? Sit. Stay. Wait. I have a feeling another do-(r)over could already be in the works, somewhere in a golden wheat field, up there, out there, in Holly-woof.