That’s why it always keeps returning, in movies like Dazed and Confused, Easy A, Mean Girls, Napoleon Dynamite, The Breakfast Club, Superbad, Ferris Bueller’s Day Off, The Duff and Bill and Ted’s Excellent Adventure.

In the riotously funny, wildly entertaining Booksmart, two high school over-achieving seniors, Amy and Molly, realize they’ve spent way too much time with their noses in books, and not nearly enough having fun. On the eve of their graduation, they decide to take some corrective measures, cramming four years of cutting loose into one wild, raucous night.

In other words, these good girls are gonna go bad.

Their quest is an unsupervised bacchanalia thrown by their studly classmate Nick (Mason Gooding). But getting there won’t be a simple task…

This is basically a high school, coming-of-age buddy-adventure movie with a brainy, bawdy, fem-centric spin. Beanie Feldstein (from Lady Bird and Neighbors 2: Sorority Rising) plays the savagely competitive Molly, the class president and valedictorian who’s already set her sights beyond Yale to a spot as the youngest female judge on the Supreme Court. Kaitlyn Dever (she’s Eve Baxter on TV’s Last Man Standing) is Amy, her openly gay best friend, who’s headed to Botswana after she gets her diploma to help the locals make eco-friendly feminine hygiene products. 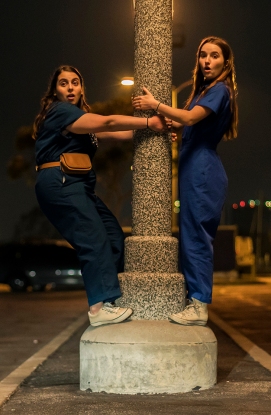 Amy and Molly’s odyssey sets them off on a quirky, rapid-fire comedic romp that becomes a multi-hued celebration of sisterhood as they careen from one manic, mapcap situation to the next. The movie is rich in colorful supporting characters, most of whom are fleshed out to become more than simply background props.

You really feel like you get to know—and like—the rich, misunderstood, terrifically funny Jared (Skyler Gisondo), who’s spent his high school years trying (unsuccessfully) to buy his way into popularity; he laments that “no one in this entire school knows me at all.” His kooky, crazily hyperactive girlfriend Gigi (Billie Lourd, who plays Lieutenant Connix in the Star Wars film trilogy) spices up the evening by showing up everywhere. Real-life skateboarder Victoria Ruesga is Ryan, the androgynous skater girl on whom Amy has a stupefying crush. You’ll find out why Amy and Molly’s classmate known as Triple A (Molly Gordon, who played Nicky Belmont on TV’s Animal Kingdom) hates her boy-toy nickname.

Stacked and packed with vibrant youthful actors, Booksmart crackles with boisterous, unpredictable Gen Z energy and a zesty embrace of diversity and inclusion. Characters discuss, experience—and explore—sexuality in refreshingly frank and candid ways, but it never feels smutty, smarmy or exploitative. Hormones rage and roar, but here the laws of attraction can’t be found in any textbooks, or plotted along gender lines.

Credit goes to the creative team, starting with four female screenwriters, three female producers and continuing through Olivia Wilde—yes, actress Olivia Wilde, here making her directorial debut. After appearing in numerous films, including Tron: Legacy, Cowboys & Aliens, Love the Coopers and Rush, she seems to have truly found her calling behind the camera instead of in front of it. And the whole project reflects, and projects, a progressive, pro-female sensibility—and sensitively—that never sacrifices, soften or supplants any of the story’s savagely funny, righteously raunchy comedic bite.

In Hollywood, where the “celluloid ceiling” for women working in the movie industry is well-documented and much lamented, Booksmart’s top-down arsenal of female talent scores a  commanding breakthrough.

The movie belongs, though, to Amy and Molly. They’ve got the mojo-spark of Girls, the crisp comedic chomp of Abbi and Ilana from Broad City, and they totally sweep you up, up and away in their crazy, intoxicating, swirling rush. Feldstein clearly has some of the same DNA of her brother, Jonah Hill, and Dever (who previously played the drug addict Lauren alongside Timothée Chalamet in the critically acclaimed 2018 film Beautiful Boy) is a star on the rise.

“Nobody knows that we are fun!” Molly tells Amy early in the movie. Thanks to the best, brightest coming-of-age comedy in years, we know it now!

I don’t ever want to go back to high school, but I’d gladly return to this movie. Booksmart gets an easy A+ from me.